The Class Character of the Ethiopian Revolution

Following is an excerpt from an article published in the first, and to my knowledge only, issue of Ethiopian Marxist Review, published in 1980 by the Study, Publications and Information Center of the Ethiopian People's Revolutionary Party in Europe. This really interesting passage on the class nature of the Ethiopian revolution appears in an article by Mulugeta Osman (a pseudonym?) that is otherwise a review of several books published on the 1974 revolution. The beginning of the essay negatively reviews two books (by Raúl Valdés Vivó and the Ottaways), before generally lauding that by John Markakis and Nega Ayele and then two works by Addis Hiwet. But this extended section stands on its own as a Marxist explication of the nature of the revolution itself. I have made a couple corrections of typos and broken the final extended paragraph up for legibility.—ISH

from “REVIEW OF BOOKS ON POST-1974 ETHIOPIA”
by Mulugeta Osman; Ethiopian Marxist Review, No. 1, August 1980 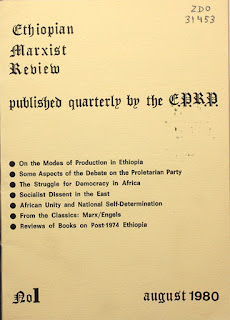 Addis Hiwet, whose writings on the formation of the centralized « modern state» and the « transitional social-formation in pre-1974 Ethoipia » are very pertinent, also advances the proposition, in his 1976 book, that the regime is a « Corporate state ».

Underlying the errors in this respect (though Addis Hiwet does not sufficiently explain why he adopts the « Corporate » label while firmly rejecting the « fascist » one), there emerges a wrong understanding of the nature and dynamics of the February Revolution itself, a negation of the proletarian character of this revolution and attributing to it the pettybourgeois label as Nega and Markakis do in the conclusion to their book. Without clearly grasping the character of the Revolution itself, it is evidently difficult to identify « the hidden secret » of the policies and line of the military regime.

The 1974 February Revolution caught in its whirlpool all the classes associated with decaying feudalism (landlords, the aristocracy and nobility the peasants) and with « emergent » capitalism (workers in the factories and industries, in the public administration, the petty bourgeoisie, lumpenproletariat ... ) . The February Revolution was not merely a revolution directed against feudalism and the comprador-bureaucratic bourgecisie, it also, at the same time, manifested an internal crisis for the trade unions, the armed forces, the state adminstration, and for the workers, peasants, women, students, etc ... The assault on the conditions of oppression led to or was intrinsically linked to the attack on the organizational forms of this oppression. Therefore, the February Revolution negated the political and economic forms of domination, in the place of feudal Ethiopia, which recognised an individual's political existence only via the possession of land and the subjugation of the peasant, the revolution forwarded a radically different conception of the organization of the society. The issue is not as to whether a particular class homogenized and led the whole movement. It was rather of a question of which class best embodied the liberation of other classes in its fundamental drive for liberation; in other words the question was not which class imposed its particular class liberation as the « liberation » of the others but rather which class had to liberate the others in order for itself to be really free.

The proletarian character of the February Revolution is not to be automatically derived be it from the number of the proletariat in the country or the abscence or presence of a proletarian party, nor is it dependent on the nature of the trade union in place. The Revolution posed the question of political power not in the form of replacing the rulers with new ones but in the revolutionary sense i.e. the social content of this power and the reorganization of the society in new forms which express the utilization of power by the masses, their social participation. The partial and sectarian demands and, thus, partial liberation, could be expressed only within this general struggle for political power and this is why all the various demands could find consensus around this fundamental issue. And this question of power and reorganization was not simply an item on the future plan but one that was being actualized (the popular committees in various areas, of which the People's Committee in Jimma is but one example) is also an important feature of the process as a whole. The revolution, therefore, could not be confined within the limits of the bourgeois democratic revolution (and even the agrarian question was linked to the question of power and a revolutionary organization of the society in opposition to the conditions and organizational forms of oppression), it was not a simple antifeudal struggle (abolition of landlordism, distribution of land, etc), nor did it confirm to the « orderly and gradual » process which the petty-bourgeois dreams of in order to realize its aspirations to turn bourgeois. The only class which could stand as a pole uniting the various revendications of the classes and thus expressing the unification of the individual and collective conditions of the various classes was the proletariat. The February Revolution, as a revolution for social emancipation, had a predominantly proletarian character, a character that cannot be exclusively framed within the actual number or organizational strength of the proletariat in the country.

This being the case, the section of the petty-bourgeoisie which appropriated the state power via a coup had to move in two. interlinked directions. One was to destroy to the last all the means and instruments which could enable the proletariat to appropriate power and social emancipation. And thus the abolition of the various committees set-up by the people, the dissolution of CELU and others and the relentless terror against the EPRP and against any attempt at autonomous organizational action. Secondly, the military regime had to present its own liberation, i.e. the liberation of the petty-bourgeoisie from its conditions of oppression by the Haile Selassie state apparatus and the bourgeoisie as the liberation of the people as a whole, the general interests of the people are thus said to be incarnated in the interests of the regime and, its logical development, in Mengistu. Hence, once again the political existence of the individual or group exists only within the framework of the subjugation of the individual by the state.

Within this framework, the resort to « socialism » as an ideological facade highlights the repression and beyond it the subjugation of the individual to the state. The military regime did not express the interest of one particular class in this respect as it was striving to mould all classes in its interest. True enough, like a bonapartist state it had the appearance of conflict with all classes but unlike such a state it did not enjoy the support of a vast section of the peasantry. The realization of the liberation of the petty-bourgeosie, actualized on the political level by the taking over power and the setting-up of new organizational forms (kebele and the like), required on the economical sphere the appropriation of surplus both from the peasant and the proletariat.

The nationalization measures are intended to facilitate the extraction of increased surplus, the accumulation of capital, etc, i.e. the transformation of the petty-bourgeoisie into a state or bureaucratic bourgeoisie. This transformation necessarily implied a contradiction with the landlords and also with the comprador and bureaucratic bourgeoisie which were compromised (by their role within the Haile Selassie state apparatus and their link with land) and attacked as strategic enemies by the February Revolution. The transformations also called for regimentation of the mass of peasants and workers within the options of the military regime.

From this drive by the regime to impose its interests as the interest and needs of the society at large follows its conflict with almost all the other classes (including the fraction of the petty-bourgeoisie which has gone to the side of the proletariat) and its drive to shape and reorganize the whole socio-economic formation. The overall weakness of the bourgeoisie as a whole, the weakness of the petty-bourgeoisie as a consequence, the continuing revolutionary struggle of the masses and the international crisis of capitalism lie at the root of the weakness of the regime in realizing its aims, a weakness that the intervention of the USSR has partially eliminated while opening up new forms of contradiction accentuating the regime's overall weakness in the long-term. In this sense, then, while the regime may have at one time or another manifested certain features that could be stretched to be called « bonapartist », such a characterization of the regime is off-mark.